At home, we have a MUM5 kitchen machine by Bosch. It's a handy device, but like anything else, it has certain weaknesses. In particular, we had problems with the citrus juicer attachment. As you can see in the following photo, the juicer is attached on top of an "arm," and I am worried about the stress that the arm experiences when I press an orange onto the juicer.

Secondly, the plastic protector on the wall behind the kitchen machine ends on the level of the juicer. This means that while juicing, the splatters eventually land on the wall.

Fun fact about 3D printing is that if you search for something popular, you have a high chance of finding existing models created by other people. So, for example, you can search for MUM5 or MUM4 (the previous model) on Thingiverse. In my case, there were no models that could help me. That's why I designed my own solutions to my problems.

To compensate for the force applied from the top on the kitchen machine's arm, I decided to create a supporting object on which that arm can firmly rest. The support would lock into the slot underneath of the arm, where one usually would attach a mixing bowl. Luckily for me, there was already a model of a Bosch MUM5 fake bowl, which is essentially a flat puck that would lock in place of the original mixing bowl. Thus I remixed the bottom of the support from the existing part. Then I only had to do measurements and design the top of the supports where it interfaces with the machine's arm.

Finally, I connected the two parts with three slim pylons that should equally distribute the load. I printed my model in PC-ABS because it was the only white filament I had at the time, and also I needed the print to be sturdy and withstand heavy loads.

Nowadays I think that PLA should be sufficient. This part mainly has to withstand the vertical compression force, which is applied perpendicularly to the layers, and PLA is pretty good with that (most of filaments are). Also, the support part experiences twisting stress when it's turned in and out of its locking position in the mixing bowl slot. This force mainly stresses the inter-layer adhesion, and I don't think that PC-ABS sticks better to itself in comparison to PLA.

A solution to the splatter problem was simple: add another layer of protection. It was reasonably easy to do a curved shield that follows the walls of the citrus juicer container and mounts on top of it.

I printed the shield from PETG. It's a relatively thin and large part, and I expect that the flexibility of PET increases the print's time of life.

I don't blame Bosch for the design of this kitchen machine. It's an excellent device. The citrus juicer should work pretty well if you use it occasionally and gently. However, I just wanted to protect myself from possible breakage. Secondly, the juicer shield is specific to my situation, because of where I use the kitchen machine and how my kitchen is designed.

What is important is that I could solve my problems with 3D printing. And now, the models that I did are available for free to everyone: 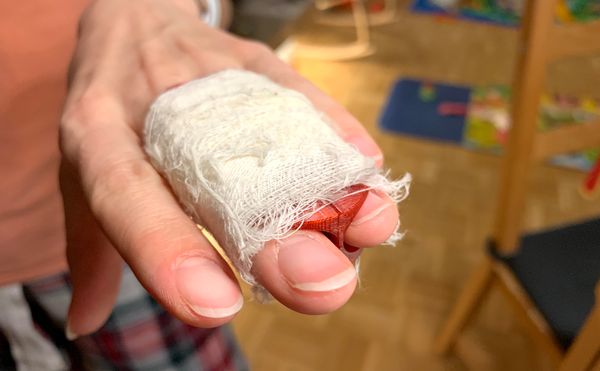 A dedicated, fast, ad hoc solution to an important and specific problem.

You know, pots are one of those things that can be easily designed and printed.